Parable of the Leaven

Exodus 12:11-15 – Leaven is forbidden the passover evening before Israel leaves Egypt. The Lord said to the Israelites you don’t have time to spice up your food (He would tell them to just eat the herbs bitter, no seasoning that night), you just have to eat and get out of there.

The spiritual significance of getting rid of the leaven is that leaven passed on from one lump to another. Some leavened lumps have been around for decades. God didn’t want Israel to continue baking with Egypt’s leaven. God is saying to Israel you’re leaving Egypt and you’re not taking Egypt with you. But leaven itself was not generally forbidden in Israel. Just in that passover and following week Israel was to purge themselves of the old leaven – no remnants of Egypt in their homes. There was a memorial of the passover that lasted a week where leaven was taken out and it’s called the days of unleavened bread. But leaven itself was never an evil baking agent.

Leviticus 23:15-21 – On the other hand, leaven was supposed to be incorporated into the feast of Pentecost. This would be the firstfruits. You know it as Pentecost. It was the first offering from the first harvest of the year; after Israel had planted seed in their land at the beginning of the year. Israel would plant seed at the beginning of the year and 7 weeks later the first round of fruit would be harvested. So the Lord appointed an offering of the firstfruits after 7 weeks from planting. The spiritual significance is great with Christ as the Passover and Pentecost the offering of the firstfruits. The spiritual truths line up with the agricultural process. Israel is commanded to use leavened bread here.

Back to the parable in Matthew 13:33 – The characteristic of leaven is that it is unseen (HID in three measures of meal), and its work will be thorough (till the WHOLE was leavened). The Lord says the kingdom of heaven and the kingdom of God are like leaven. So to say leaven is evil in the Bible is not entirely true. Leaven doesn’t poison the food, it makes it better. When Jesus Christ says the kingdom of heaven is like leaven, or the kingdom of God is like leaven, He’s not saying these kingdoms are basically corrupt. Nor is he saying they are corrupted over time. The two characteristics are that it’s unseen and it is thorough in its effect. When the unseen work is complete, the dough is ready for the oven.

Luke 17:20-30 – kingdom of God and kingdom of heaven go largely unnoticed until the Father is ready for the Son to return. 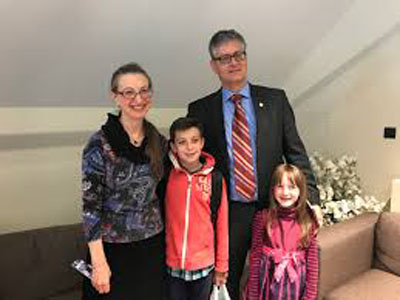